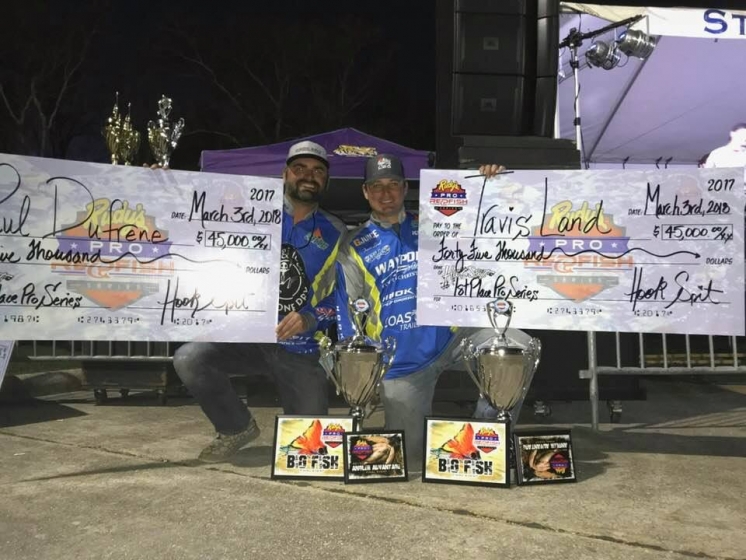 Wow, what a great event the final stop to end our 2017 Rudy’s Pro Series. Remember everyone this was our makeup event for the Hurricane Harvey reschedule back in August.
We held the makeup event at Hopedale Marina in St.Bernard Parish in Louisiana which is one of the favourite stops on the Tour and its anglers. Our captain's meeting started off at the one and only Docville Farms there in St.Bernard Parish. Conditions were a little different from the last time the anglers were at this location. There was a lot of fresh water flowing into the local marsh from the Mississippi River which dumps into the Gulf of Mexico affecting the local bay and estuaries in the areas.  When we showed up to the area and we saw our teams pre-fishing and visited with them. The stories of how the fishing was way different from the last time they were here and were not catching as many as they had at the last stop.
The weather was a little windy and overcast with a front rolling in on the evening of captains dinner. Everyone knew things would change by the time they would be released in the morning. The teams were released on the first day with it being very windy and cold and we got ready to see who would take the lead on Day 1. The scales opened at 2:00 pm at Hopedale Marina. After it was all said and done on Day 1 the team catching the biggest single redfish went to Lance Reynolds and Mark Dufrene with a weight of 9.19lb. With the scales closed the team of Travis Land & Paul Dufrene were at the lead of the pack with a total weight of 16.88lb. After the weigh-in, we served everyone a Jambalaya and Fried Fish dinner.
The morning of day 2 was a picture perfect day with a cool morning and a beautiful day for fishing. As teams got ready to blast off we lead with morning prayer right into the national anthem. As we called out boat numbers teams where pumped up for a great day of fishing. As the teams made it through the process of weighing in to see who would take home all the glory for the final stop and the Team Of Year race fixing to be decided in the next few minutes. To claim Victory for the final stop of 2017 Rudy’s Pro Series the team of Travis Land & Paul Dufrene held their Day 1 lead with a Day 2 weight of 17.05lb. which would leave them with a 2 Day total weight of 33.93lb. to take the win for the final stop. Congrats gentlemen on a great win! The team of  Austin Angel and Lance Reynold was nipping at their heels with a 2 Day weight of 33.01lb. great job fellas.
The Team Of The Year was awarded to the Team Of Kevin Akin & Eddie Adams. Hats off gentlemen top 10 all season in this competition is an amazing achievement. Also great job to Austin Angel and Lance Reynolds on getting 2nd Place Team of Year and 3rd Place Team Of The Year going to Chris Logan & Jason White.
This was a great way to end the 2017 Rudy’s Pro Redfish Series, a special thanks goes to the Meraux Foundation, St. Bernard Parish, and Hopedale Marina for all the love and support.